Last week, I flew to Las Vegas for work. I wasn’t paying that much attention to the people around me as I waited to board my flight, with my head down in my laptop to prep for my trip, but then, there was a fuel leak. And a two-hour delay. In a very small airport.

Let me tell you, after two-hours with the same group of 200-ish people, all crammed into a semi-small-ish room, knowing that you still have to get on the plane and fly with them (you know, sometime after they figure out why there is JET FUEL POURING OUT OF YOUR RIDE), you start to judge them. Harshly. (They were likely judging me too. And, that’s fine with me. All is fair in love and flight delays.) 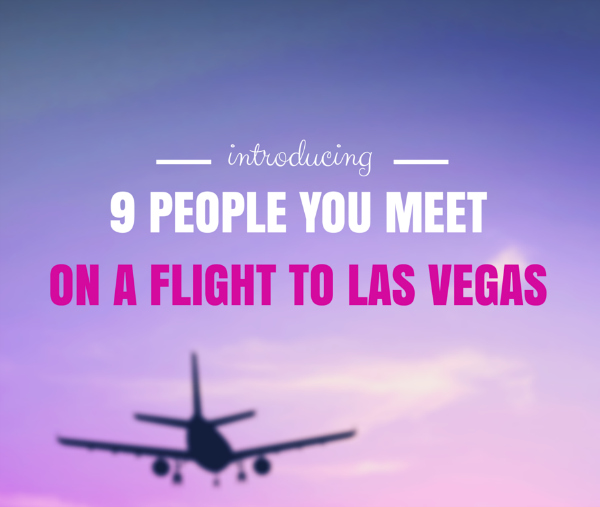 9 People you meet on a flight to Las Vegas

1. The one who is most likely a “dancer”
Girl, guess who you’re fooling? Nobody.

2. The ones on a guys’ trip
There are two of them. Trying so hard to look as heterosexual as possible. Because in actuality, they’re on a date. Even if they’re going to Vegas to pick up women. They’re on a date. And they really, really, REALLY don’t want it to look that way.

3. The ones on a girls’ trip
There are matching capri yoga pants and ponytails and by the time they leave the airport bar after the flight delay, there’s a local shortage of skinny margaritas. There are selfies. And mentions of husbands who will likely not feed the children while they’re gone. And more margaritas.

4. The ones who are ready to hit the pool
He’s wearing swim trunks with his sneakers. She’s wearing her bikini and a cover-up (I have the same one, from Target). They’re going straight from the airport to the pool when they hit the ground. And, from the smell of them, they took those sunscreen application suggestions very seriously.

5. The ones who golf
They didn’t bat an eye when the airline charged them $75 each to check their precious golf bags. They are wearing golf gear, head-to-toe. Lots of breathable fabrics and polo shirts. And, they have a limo picking them up at the airport.

6. The ones who are drunk before we even board
You’re praying that they aren’t sitting behind you on the plane. And, they are. They’re teasing the flight attendants. They DIYing their in-flight cocktails with extra splashes from a bottle of something from their carry-ons. And, after a two-hour delay in the terminal bar, they end up passing out 10-seconds after the plane finally takes off. Thank goodness.

7. The ones with kids
Apparently, Las Vegas is more family-friendly than ever. Apparently, this news doesn’t make parents less bitter about having their kids tagging along.

8. The ones who left the kids at home
They’re pretending to be ready to party, but they’re checking their texts obsessively and they’re the last ones to turn off their cell before taking off, with endless “I love you!”s and “I promise to FaceTime every night!”s. Then, they order doubles from the drink cart and get shitfaced.

9. The ones who are going to gamble
They don’t have any luggage. Maybe a fanny pack. Or, a card holder/wallet that hangs around their neck for convenience. They have their favorite slot machine at the Las Vegas airport and they refuse to tell the guy sitting next to them which one it is. Because they come to Vegas every year and this year, that machine is going to make them rich.

Next up… 9 People you meet on the way home from Las Vegas. (Spoiler: Same people. All passed out.)